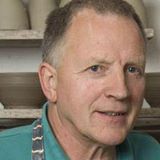 A dear friend Robin Dauncey died recently just a month after being diagnosed with bowel cancer. He worked for 45 years as a professional potter in Norwich. Unfortunately, I was unable to attend his funeral. It feels as if I haven’t said goodbye. I keep expecting to bump into him, as I always did, in St Benedicts Street. ‘Fancy a cup of tea,’ one of us would often say. The other almost always would.

I wanted to pay tribute  in some way. He was so sociable, so friendly. He knew so many people. I remembered that I had interviewed him back in September 2007. I had offered to help him with some publicity and took down four pages of notes for future use. They were a bit random, just chatting while photographer Andy Sapey took some images of his workshop.

Then somehow the planned press release was forgotten because the time had never seemed quite right to publicise his studio. The notebook was filed away. Now, it seems more poignant and I wanted to write up some of the things he said. Apologies for the missing bits, and questions arising 10 years later. This is just from my notes, from 10 years ago, so some of it may not be quite right, since I would usually read it back to Robin to check through. I am sad beyond words that I can’t.

Robin knocked on the inside window of his pottery studio. “Want a cup of tea?” He was mouthing the words and tipping an invisible mug to his mouth. I could hardly see him through a fug of clay dust and a window covered in a grey chalky film. Like Robin, I always had time for a cup of tea. We both worked in studios in Swan Yard, in Norwich and it was always a relief to break the solitude, stop working and have a chat – and procrastinate for a few minutes.

Proper loose leaf tea sieved into Robin’s sturdy pottery mugs, we would chat about his work, my work, his family, my family, his cricket and cycling, my hockey and running. Politics (he had strong views here). His hockey scar on his forehead, people we knew, how hard it is to work for yourself, but how impossible to work for anybody else when you’ve been self-employed for years. His clothes, even when he was out of the studio, always had a light dusting of clay on the elbows and sleeves.

“Pottery is a dying art in the UK,” he told me, as I made notes one morning in September 2007 while Andi Sapey took still life photographs of his pots and wheel. “Art schools have difficulty filling pottery courses. They just can’t get students to do it.” (I’m wondering now, whether 10 years later, post Grayson Perry and his influence, whether this still applies?)

Robin had no formal training as a potter. He began throwing at evening classes in Birmingham. His formal training had been as a civil engineer, but this work never appealed. “Work involved building motorways, but I never felt it was right to construct all those roads, such as Spaghetti Junction,” said Robin, ever concerned about the environment.

Pottery was more appealing. Robin saw learning to throw pots as akin to learning to play the guitar – to succeed and excel you had to do it every single day without exception. Once he started learning, this was what he tried to do and he never stopped learning and perfecting through a lifetime of throwing pots.

As a child he had loved making stuff and this had led his parents, rather misguidedly,  to suggest a career in engineering. In the evening he made models. “This was about being creative. I made everything from papier mache mountain scenes to balsa wood boats.”

But it was making pots not roads that suited his skills and temperament best.  “I was hopeless at maths and it was a real struggle,” said Robin. By 1968  craft was in vogue and Robin was keen to get out of engineering – althought this was the career that brought him to Norwich in 1971.

Alongside building concrete bridges and roads, he was plotting his exit into the world of craft making.

“I bought a kiln and a wheel and installed them in a shed in Wellington Road. After a couple of years I left my job at County Hall and got a part-time driving job and spent the rest of the week doing pottery. I was much happier.”

Finally, he moved into a studio in Elm Hill, in 1973 where he made tablewear, selling the business in 1985 to work at home. (My notes here are too sketchy. I want to ask him for more detail. What did he do at County Hall, what was it like, why did he sell the business in Elm Hill?)

There were lots of potters in the early seventies, Robin told me. He attended ‘high-calibre’ pottery classes at Norwich Art School run by Hugh Forward (again my notes are incomplete and I haven’t checked the spelling of this tutor. There’s also no mention of him anywhere on the internet).

“At this time there were a couple of dozen potters in Norfolk – after Cornwall it was the country with the highest density of potters in the UK,” said Robin. “It was down to cheap rural property and still being within easy reach of London (Looking back now, I would like to debate with Robin whether Norwich and Cornwall are, were, within easy reach of London, but that’s what he said).

The Waffle House, the Norwich restaurant arrived in 1978 (Is this the correct date?). With its hippy vibe, bamboo tables, macrame lights and shelves full of pottery, it suited Robin’s craft. They began to buy his pots to serve food from – and to my knowledge were still doing so until Robin’s death.

Then suddenly, like Afghan coats and Prog Rock, pottery was out of fashion. The 80s and Margaret Thatcher arrived. Out went craft and love and peace and in came making money and shoulder pads. The world had changed and the market for pottery decreased. Many of the potteries that had flourished in Norfolk closed down. People began to eat off cheap, industrial-made ceramics. But Robin carried on as he always did and people loved his pots and continued to buy them.

Robin was unusually scathing about today’s throwaway, fast-culture which he felt began with this shift in the 80s. “People aren’t prepared to put in the effort to achieve something. They want fame and fortune and Big Brother but sometimes it takes time to do things. Pottery takes a lot of application to master and we aren’t encouraged to do that sort of thing these days.”

“It’s a decadent society where people are not prepared to put in the graft. I sound like ‘disgusted of Tonbridge Wells’ I know, but it something I feel strongly about. We have such a fast culture and these days people don’t seem to appreciate things that are handmade (again I wonder if this has changed since 2007).” Robin blamed Margaret Thatcher in part. “With her came a culture where nothing matters as long as there’s plenty of money to be made.

He was angry that artists, even Fine Artists, were increasingly losing craft skills, with some hiring other people to do the work. “Artists have an idea and they get somebody else to do it. I feel really confused at the moment. I was brought up with the idea that art has something to do with skill but not any more – it seems conceptual. But perhaps that’s okay? All I know is that we are just not a culture that makes things anymore – knitting, sewing, pottery.”

Robin had been at Swan Yard for 10 years when I interviewed him in 2007, and since he moved his studio to St Benedict’s Street in 2016 that makes a total of around 19 years spent working there. That would account for the layers of clay dust and piles of not-so-perfect pots that had accumulated there and which I loved sorting through, hoping to find a long-forgotten gem of a pot.

He never seemed profit driven – quite content with the process of making pots. I get bored easily and was fascinated by what he called ‘repetition throwing’ or his ability to make the same items over and over again, for many years until they were as perfect as he could make them. I’d often question his dedication to perfecting the range of pots he had designed, often many years earlier.  “Don’t you ever feel like going crazy and making something off the wall – a weird new teapot or a strange cup? Something really different.” But he loved the sense of continuity and I eventually came to understand why and the value of this. He relished the skill involved in forever perfecting a set of designs, such as his plates and teapots.

Once, I insisted on making him change one of his designs and commissioned him to make me a set of blue-glazed bowls – with some painted on polka dots. Just to shake the design up a bit. They weren’t great. He was right. He was the artist. My design was terrible. When they broke eventually I ordered a new set of his original bowls.

“So how did you come up with this set of designs,” I ask. He’s not sure – they just evolved. “The teapots have short stubby spouts because it stops them getting chipped. The bowls are stout rounded-rims so they don’t chip. Practical stuff.” But there was one big change, bringing in the new black glaze in addition to the stonewear and blue glaze. I loved this and bought tens of items from him. I hate to eat from anything else but Robin’s black-glazed plates. I don’t even want to think about what I will do when they break. They now seem so precious.

“In the end I am doing it for myself,” he told me. “It’s therapeutic to do a couple of hours’ throwing. I enjoy it. I really love doing it. I love making things. My customers appreciate the skill involved but it’s become a small market.”

“What about passing on those skills? Have you ever thought of having an apprentice,” I ask him. He had tried a couple of times, but it had been a little time consuming teaching people and he had preferred to get on with the work.

Robin was content and this made him a pleasure to spend time with. There was never the sense that he wanted to be somewhere else, talking to somebody else. He enjoyed the present as much as anybody I have ever met. “I’m happy with the way things are – it would be nice to earn a little more money – but I’m happy with it.”

Robin loved his customers and driving around the Norfolk countryside, and sometimes further, delivering the orders himself. “They are just nice people who appreciate the skill that has gone into the work. I sell via my website, by Yellow Pages (this was clearly written in 2007 for who uses this now?!) and by word of mouth. I have Bohemian customers. I make a day out of it when I take their deliveries because packing is expensive.”

“I never get bored. Never. Even though I’ve been making the same designs for years. I like getting repetition orders. Every time I try to make it more efficiently and better than before. I have to keep standards high. I love the freedom of my life as a potter. The sense of excitement as you open the kiln door. I  have done it twice a week decades and there is a real job satisfaction. There is a sense of achievement at seeing the whole thing through from start to finish. Yes, it’s true that I never, ever get bored.” But, like myself, Robin did like frequent – very frequent tea breaks. Preferably to drink Keemun or Darjeeling blend from Wilkinsons tea merchants. Goodbye Robin. I will miss you.